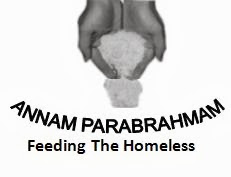 We started Food Distribution Program in Anantapur under Annam Parabrahmam Project. This initiation is taken by our Volunteer Basha Garu as we discussed in our last volunteers meet in Anantapur. From today onward s we planned to do Food distribution regularly either once or twice in a month.


We distributed 26 Lemon Rice packets along with Banana's. We also distributed old clothes to destitute. Food was sponsored by student of Basha Garu who is learning Ayurvedic treatment from Basha Garu, his name is also Mr. Basha Garu.

We didn't used any plastic bags for carrying all these packets etc.,. I really appreciate his patience. He prepared lemon rice and packed neatly without using Plastic Covers.

We started Food distribution @ 6:30 PM from old town then moved to  Bus Station, Railway Station, One Town Police Station, Sai Nagar, Collector Office and finally went to Govt. Hospital . Some of the destitute requested us for old clothes and  they felt very happy when we given those clothes to them. We completed food distribution around 8:30pm.

I really felt happy when we given food to old women destitute,  she again requested for another packet for her son. Her son is taking treatment in Govt hospital.  Some of the beggars theft the money from her son  and they were beaten her son so they came to hospital for treatment. Even at her age she is serving her son (may be Mothers love). It's really heart touching. 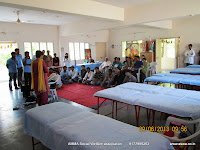 First of all i Congratulate all the blood donors for their selfless donation of Blood to save little Thalassemia Kids. We successfully completed 9th Blood Donation camp  with 76 donors on 9th June,2013. This is my first  blood  donation camp organized  in Hyderabad after taking the coordination of this Total Project. 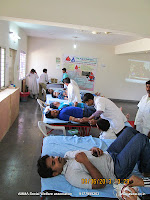 We are Conducting Blood Ddonation Camp for every  3 months to extend 15 days life to innocent Thalasssemic Childrens. This time we also included Thalassemia Awareness Session by Dr. Suman Jain, in order to create Awareness on Thalassemia. In this we can find answers to questions like What is thalassemia? How it comes? What are the precautions we need to take to avoid? How we can identify this?  and many more. Our special regards to Dr. Suman Jain, Secretary of THALASSEMIA & SICKLE CELL SOCIETY.
In this camp more than 100 participated and 76 donated blood. W can save these childrens only by donating blood.
We can prevent this disease by creating awareness and by HBA2 test (Every one-Anytime). It is important to go for this test for couples, before/immediately after marriage or atleast at the time of 8 weeks pregnancy. In this society 1790 Thalassemia affected children are registred. They need blood transfusions for every 15 days along with costly

Thalssemia Society is providing Free Blood Transfusions and Medicines at subsidy prizes. Every single unit of blood will give life to three childrens. We always here to help you to conduct any Blood Donation Camps even for 40-50 Donors at your own place (Colony/Group/Office etc.,). We will take care of all formalities. What we need is just a Reference. Every unit is most valuable for this Society and to the children... 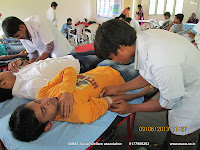 Our Special Thanks to Staff of Thalassemia Society for their cooperation in conducting this camp along with Management of Srinivasa Nagar Community Hall who always stretch their hands in helping us for our activities by providing free venue at the Heart of the City....

Few donors got disappointed as they rejected due to differnt health reasons. I hope they will turn up again after improving their health and hemoglonig. They may got disappointed, but their rejection is for their safety only.

Who are interested in conduct blood camps in your premises to help thalassemia childrens call Naveen @9849685946.

We need Volunteers who can spend at least an hour in a month to help the society (regularly or occasionally)... Interested can reach me @ 9177999263. 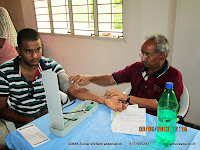 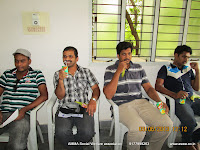 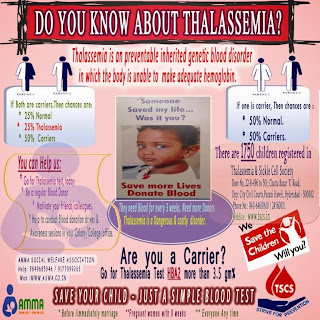 Get together- 2nd June Sunday 5 to 6PM@SR Nagar 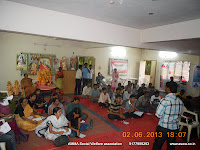 Its been a Great Get together meet of like minded people

Around 40 New volunteers turned up for this session.

Their interest and initiation is really inspiring.

I have received around 150 calls after reading Sakshi Article, expressing their interest to participate in our activities. So we conducted a Get together meet. Out of those 41 turnedup and few joined us later in other activities. 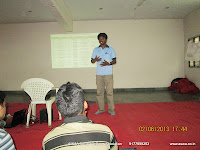 Hope this session gave required information to the attended New Volunteers. ASWA is eagerly waiting for their turnup. We can do more things with your support. We need to spread as much as possible about Good Deeds and Thoughts, so that we can indirectly remove the bad in the society.

Thanks to all the volunteers who turned up even in Rain.

Our existing volunteers efforts in making this event a successful, is very inspiring.

APPRECIATION TO TO OUR BELOVED PRESIDENT S. SREENIVASA PRASAD RAO FOR HIS REGULAR BLOOD DONATIONS BY APSBTC 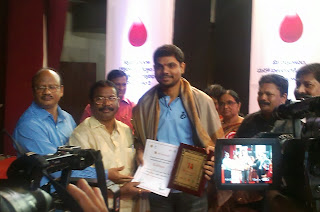 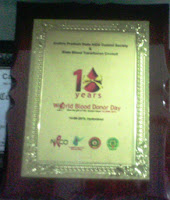 Its a great Pleasure to attend the program of  World Blood Donors Day Celebrations organised by Govt of A.P.  The main purpose appreciate & motivate Donors who are regular Donors and who are also motivating others to do so by creating awareness. Our beloved Founder President (of AMMA SOCIAL WELFARE ASSOCIATION) Mr. SARVARAJU. SREENIVASA PRASAD RAO selected among one such donor in the 10th World donors day celebrations by Govt of A.P. He donated Blood more than 20 times till now. It may be a small number, but his regular efforts in conducting Camps and motivating people is really inspired. He is showing his responsibility towards society. We need to join with him.  Do join him in Donating Blood Regularly and also to create awareness about it.

The guests are given the speech about importance of blood & current requirement of blood in A.P.

We have know some facts about blood.

In Andhra Pradesh we have 5 crores of blood donors  but only 8 lakhs of donors are donating blood & but requirement is more.It should increase only by self initiation and awareness.

In twin cities we have 3.2 lakhs of donors required but only 2.17lakhs  donors are donating blood. So still1 Lakh of Large gap is there. Even the developed Corporations like Hyderabad has that huge gap then what about villages, cities where we dont have much resources. We all know that Blood comes only from voluntary donations.

Finally , I wish  him to continue his many dedicated serving deeds.  May God Bless you friend...... 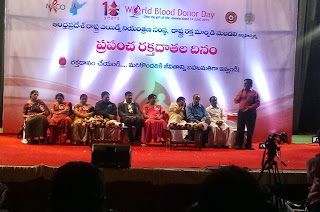 This visit was organized by Basha garu. Our sprecial appreciations to Basha garu for taking intiation in doing activites in Anantapur.

Panduranga Rao  garu family arranged lunch to 25 childrens (includes kesari,lemon rice and curd rice) along with this we also distributed mangoes to childrens.

Sreeram Garu Founder of Beraka orphange Home conducted the prayer to bless us.

Most of these NEw volunteers are  showing much interest to participate in our activites .

Visit of Raja Munendra Orphange Home, Near R.D.T Stadium, Anantapur on 26th May, 2013 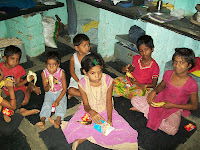 In this home nearly 16 childrens  are living in  this home .But due to Sunday, boys are  went out  for  regular prayer conducting by founder of this home.  .We just meet only girl childrens only in this home. All they are studying in Saraswathi vidya School in anantapur below 8Th Class.. 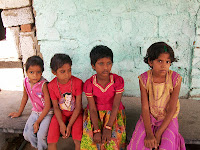 As we played games with childrens & explained some motivational stories.

In this home visit one of my friend K.dasartha joined with us.He felt very happy when they seen those childrens.

Finally we distributed bananas and biscuits to childrens.

We are extremely happy to inform you that our "Personality Development Program" under VIKAS PROJECT is ready to start from tomorrow. This academic year (2013-2014) we planned to improvise our last year activities and efforts in order to improve children's skills & personality further.

In previous years we conducted competitions in many different schools occasionally, which has impact but we thought with regular follow-up we can see much more development in children. So we planned the below activity which will be easy for all i.e. School Management, Our Volunteers and for the Students.

Flexibility in planning this NEW ACTIVITY is


Based on our Volunteers strength we have taken the below 3 schools, and will conduct our above planned sessions regularly once in a month on specified day (1st/3rd/4th Saturday). These all are one time activities and will improve few skills in students. If more volunteers comes we will conduct in more schools.

Our activities includes any of the following (order may change). 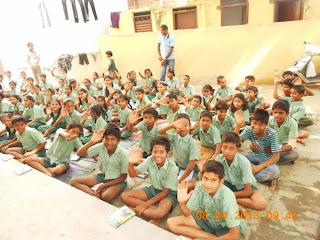 First of all I would like to say thanks to everyone who ever support us and guide us to complete this session very successfully,  we got permission to take classes for next year also.

30th session on 7th April
We have given best students and best player awards to the below students.
Best student award for this year (2013-2013). based on studies, Discipline and Behavior

After that we conducted exam for 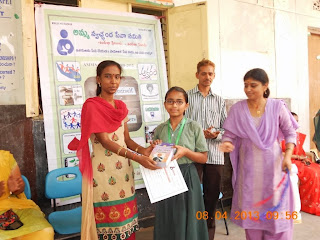 Based on exams we conducted prize distribution to children

This Sunday we are going to conduct home visit at Sivananda Rehabiliation Center, Kuakatpalli, under Share & Care Project.

This is an opportunity to support selfless deeds of Thalassemia & Sickle Cell Society which is helping more than 1750 little Thalassemia kids.

What all you want to do is just Purchase an entry pass for their 15th anniversary celebrations on this Saturday. Pl confirm me by this Wednesday. Dear Srinivas garu,
Greeting from Thalassemia & Sickle Cell Society
We are going to celebrate our 15th anniversary ( Crystal Celebrations ) on 15th June 2013 at Satya Sai Nigamagamam, Srinagar Colony. This is mainly for raising funds for well being of our society. We have entry passes also for Rs.500/- & Rs 1000/-.
I am sending invitation as an attachment. Kindly go through it.
Regards
Durga
9908888615
9030957399

Please participate to save 1750 Thalassemia affected children.  They need 3500 units of  Blood Every month. Pl donate come forward to donate blood. If you are not eligible to donate, pl come at least for awareness session. 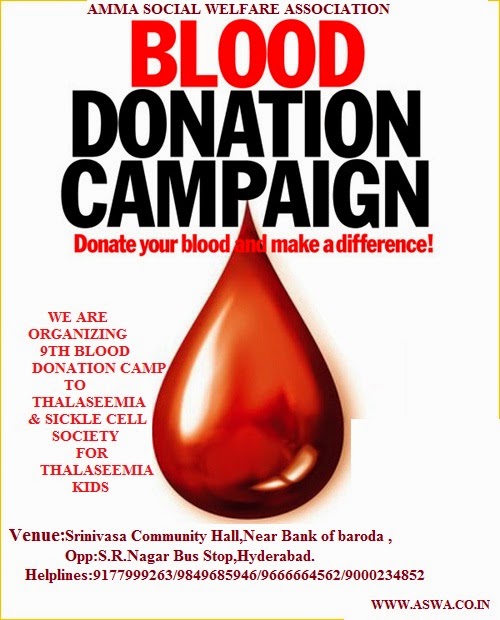 We called many…. Sent messages to lot of people… Forwarded detailed mails to all the contacts…

Posted in Face Book and other Social Networking Sites…. Many Shares & likes……We requested them to come at least for Awareness ….

Nothing can happen Without your Initiation & Direct Participation.

Pl Forward this Mail to Your Friendz
Join us to save "1750 Children's who are regularly going (Twice in Month) for Blood Transfusion"…..
Every Single Unit makes a difference in a Life of a Little Kid…
These Little Kinds needs YOU ……..Their life's depends on YOU i.e. DONOR…
We won't expect Thousands of Donors from Your Side……We only need YOUR active & direct Participation……
https://spreadsheets.google.com/viewform?formkey=dDlzWjBuTkg1eXdkMS1oOWxMdFpVRXc6MA 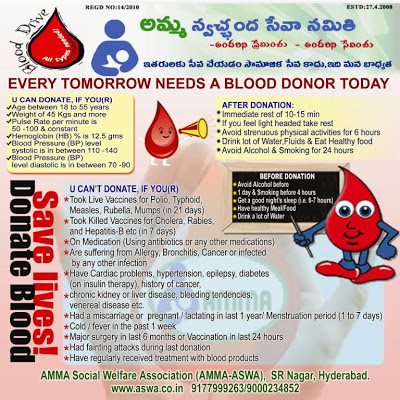