Re: Support to MAA organization

Thanks to all the donors for their kind contributions. Your every rupee is most valuable and have optimum utilization in ASWA.

Requesting any Individual / Group near Bhadrachalam to Visit this Place and update his activities.

Thanks to all the Donors for their valuable support and contribution. 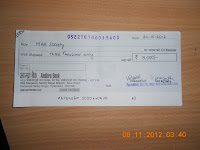 Requesting any Individual / Group near Bhadrachalam to Visit this Place and update his activities. Mr. Deepala. Suresh (AID India) verified Personally and requested us for any Help. He confirmed that he is doing commendable work.

Please acknowledge the above.

First of all, we are very inspired after listening your efforts in Konta village in Andhra-Chhattisgarh boarder and really moved after a long chat with yourself.

Thanks  Suresh for introducing such an inspiring personality.

In our Monthly Meet we discussed your request of supporting your Food Distribution activity (MAA Association) in Kunta Village for destitute & Old age people.  Initially we would like to extend our support of Rs.750/- Per Month (approximately 25 Kgs Rice Bag).

Please send MAA Association Account no, so that we can transfer funds. Once again it's our fortune to here and work with people like you.

Thanking you so much
Suresh


About MAA organization:MAA Society was formed in 1996 by J. Rajaswar Rao (Rajesh), but officially registered in 2002. He hails from Dummugudem Mandal in Khammam district. A social worker turned RMP, Mr. Rajesh has been doing quite a commendable job in the Tribal areas of Konta block in Chhattisgarh, which is just 3 KMs from one of the towns, Chintur, in AP. More about the organization and its activities could be found from the attached profile of the same

My affiliation with Mr. Rajesh and MAA:It has been 6 months since I have known Mr. Rajesh. I have been introduced by our AID friends who have been working in that area. In this time span, I have gone to the areas where his organization works and have seen how they have been working. Before this, I have been working on Human Rights crisis in Chhattisgarh for the past 3 years and have had good exposure as to the state of affairs and plight of the Tribal communities living in the area. This is how I could closely see and relate how important the works of Mr. Rajesh and his organization are. To my personal opinion so far, he has been a sincere person at work and has been doing an extremely important work, to the relief of many of the tribal communities living in Konta.

Current issue:Apart from the regular works that are enlisted in MAA organization profile, one recent activity that MAA has taken up is that of supporting aged and elderly with 3 meals a day. This has been initiated after Mr. Rajesh, in his years of field work experience, noted that there are some of the aged and elderly who are fully destitute and are not able to support themselves with food. Moved by the situation, he took a small place on hire and set a temporary shelter where the nearby aged and elderly destitutes can come and have 3 meals a day for free of cost. This has been going for last few years with the good will support of t he local people; they have been donating rice, vegetables and other amenities so far. However, the current issue is the lack of finance as the inmates are slowly on the rise.  Currently, Mr. Rajesh is able to support 25 – 30 old people, who have been regularly coming. In addition, there are some more people who are in need of the same support. Due to lack of finance, Mr. Rajesh is finding little hard to support to regular members itself. And the more number of people in need of same service is another extra burden on Mr. Rajesh. He is in a position where he cannot either deny support to the regular members or even the rest of the people in need.

Proposal:Since finance is the main problem for Mr. Rajesh, that too just for basic amenities, he sought our help if we could be helpful to him to get some donors who can either regularly or at once donate food amenities. I was with him yesterday, discussing the same proposal. I have also gone to temporary shelter that he is running for people who regularly come to feed there, and I saw the need. Since much of the food need is met through relying on local donations, both kind and monetary, which is not reliable source to run such an activity, we thought to look out for people who can support this activity to their possibility.

So, the humble proposal and request to all of you is to try and support this initiative as much as you can as individuals or as AMMA.

One point I want to make out here is that the area where MAA operates doesn't have many NGOs and welfare organizations working for people. Perhaps, there are very few organizations like MAA which are doing some good activities. This is because the area is not much developed and as mentioned above, majority of population living there are Primitive Triabal Groups (PTGs). On the contrary, the need and issues of the people over there are so many. This partly reflects the grim situation of the people living there.

Budget Details:We made a small rough calculation about quantity Rice which would be required per month and the cost expenditure.Currently, there are about 30 regular inmates. They quantity of rice required for their 3 time feeding is 15KGs a day.


The donation could either be done in kind or in monetary terms. Anything is ok.


P.S: So sorry that I had write this proposal in rush, as I didn't have time. For any clarifications, please write to me
AT 3:06 PM